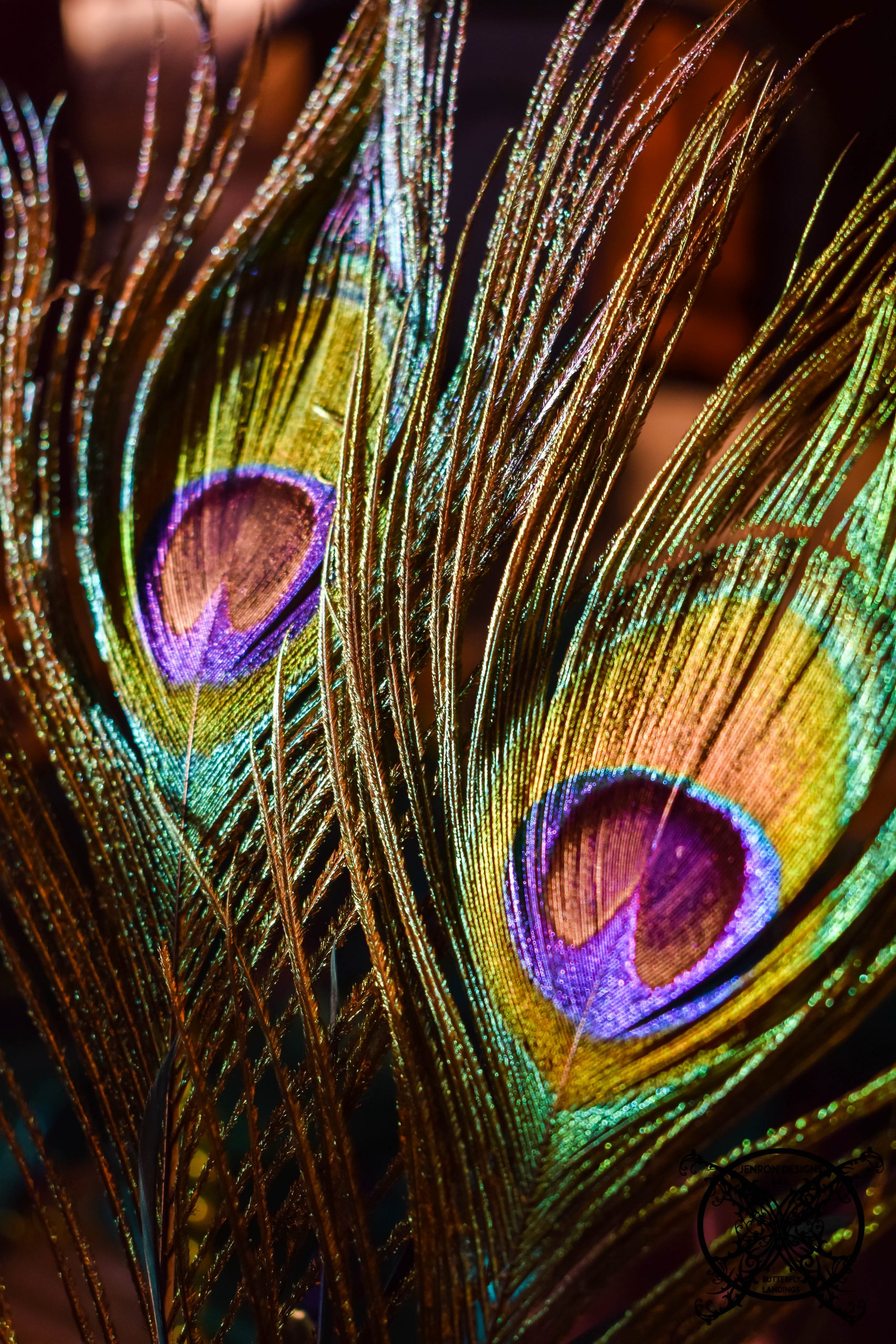 Hey, remember that old Zatarain’s commercial where the lady shouts “Throw me some beads mister?” Well that was my soul inspiration for this Fat Tuesday, Mardi Gras table.

I have always wanted to create a fun Mardi Gras themed tablescape. Being a native Georgia girl, I grew up hearing all about Mardi Gras, but it was never really celebrated this far north.  It was very popular in southern states like Alabama, Mississippi and of course the king state of celebration we all know Louisiana. 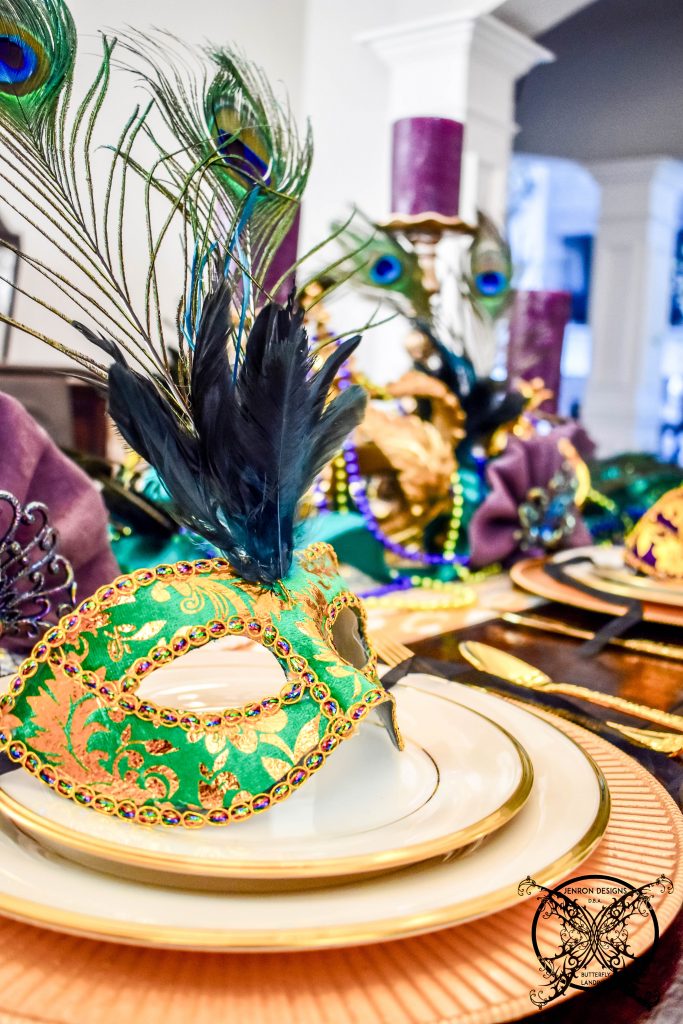 My father was always a fan of the Big Easy. He loved the dixieland jazz music and the fantastic cajun food, and had visited the area many times on business. Including the small town like Slidell, Louisiana which I always heard numerous stories about. 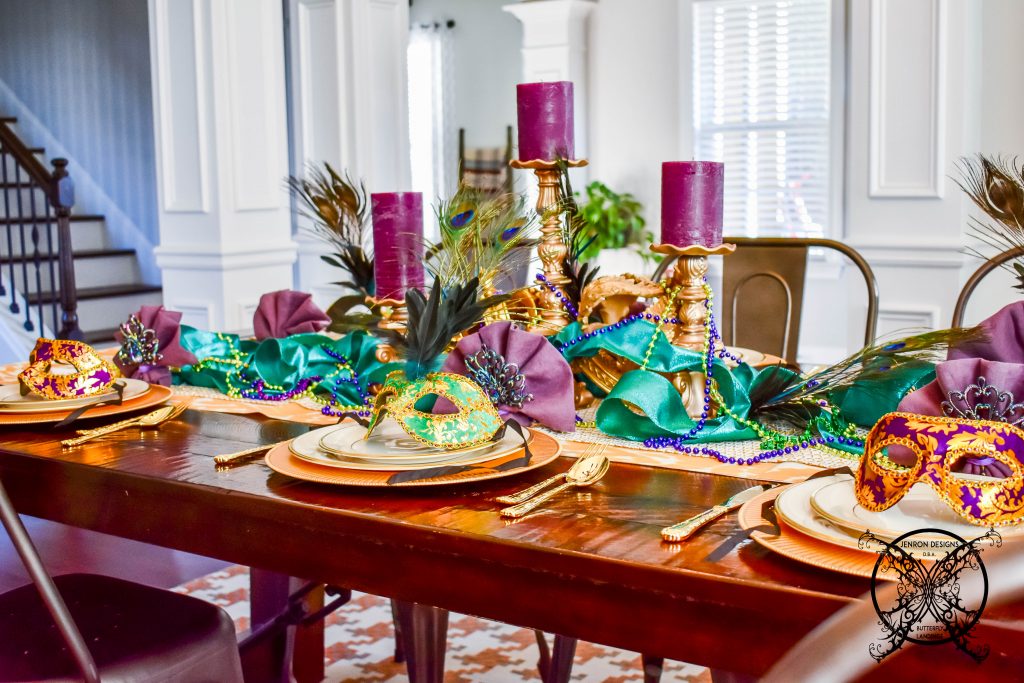 My mother was a fan of Justin Wilson, known for saying things like  “I Gua- Ron- Tee” and “How Y’all Are?” We must have watched him every weekend on PBS. This is where she learned to make several of his famous dishes which in turn appeased my father’s love of cajun food. 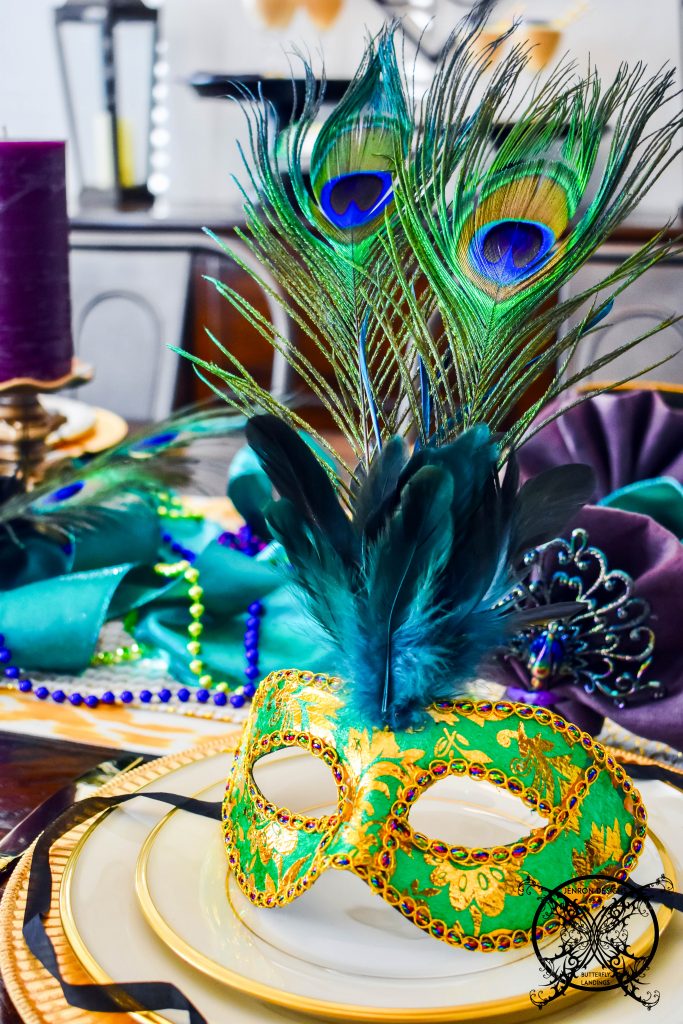 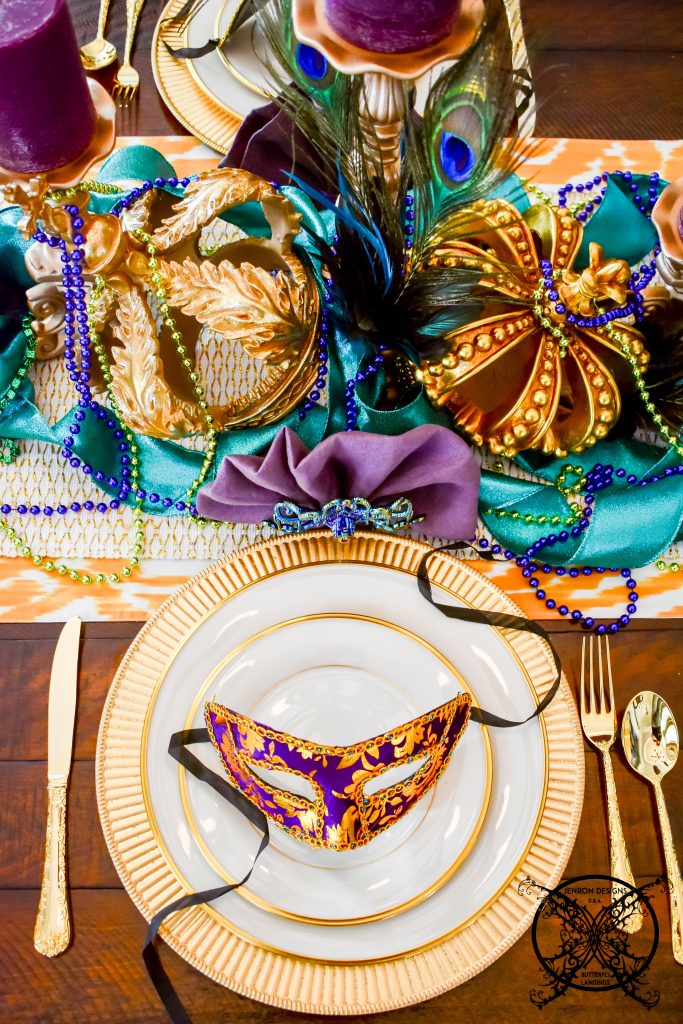 Be sure not to confuse Carnival and Mardi Gras! Carnival refers to the period of fun and feasting that begins some time in January  known as The Feast of the Epiphany. 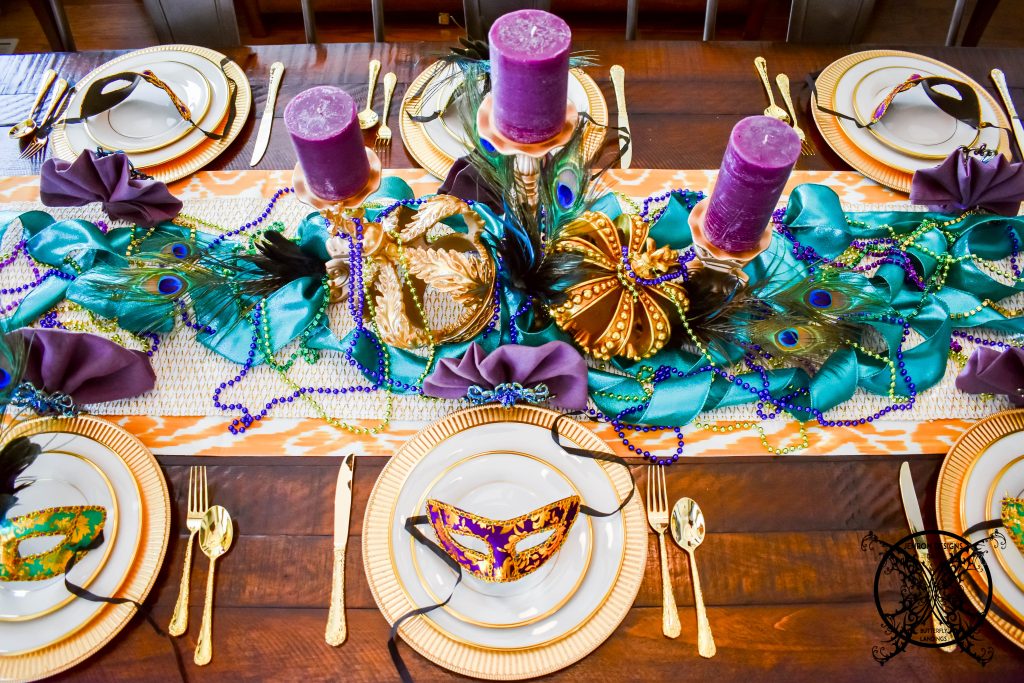 Mardi Gras actually refers to “Fat Tuesday”, which is the final day of revelry before Lent begins on Ash Wednesday. The dates of Mardi Gras are determined by Easter each year so there is not a set date, it can be as early as Valentine’s Day or as late as St. Patrick’s Day. 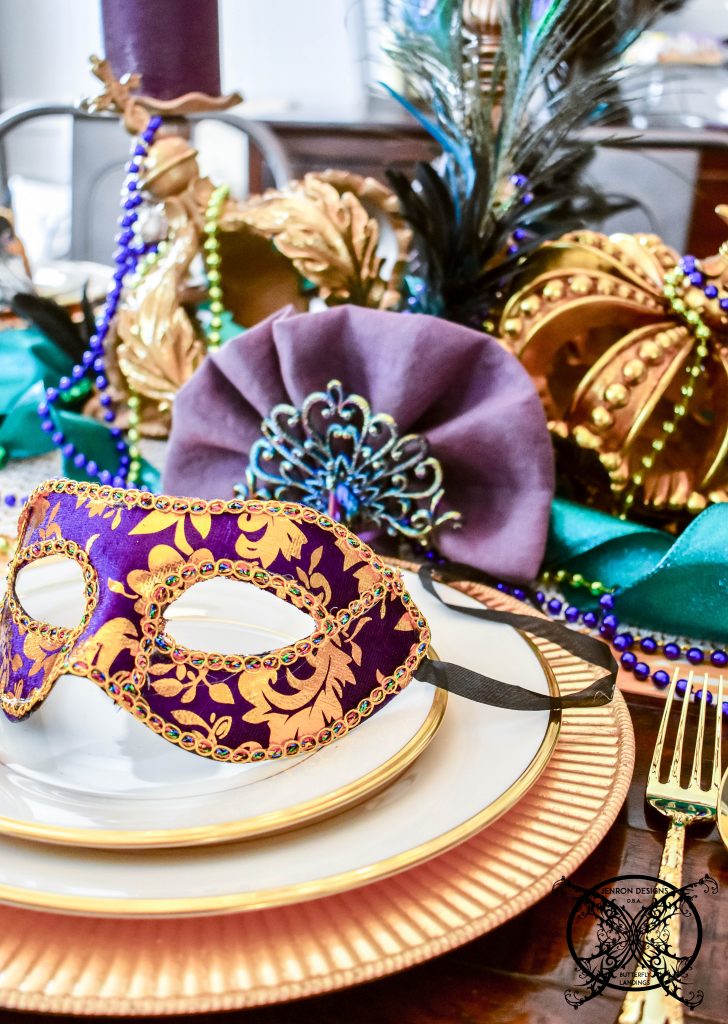 Ok, so as a Georgia gal I looked up a quick history lesson on Mardi Gras, from history in New Orleans, as there are some variations from region to region. It was believed to be originally established in 1718 by Bienville. In the early 1740s, Louisiana’s governor, the Marquis de Vaudreuil, established many elegant society balls. These became the model for the New Orleans based Mardi Gras balls of today. 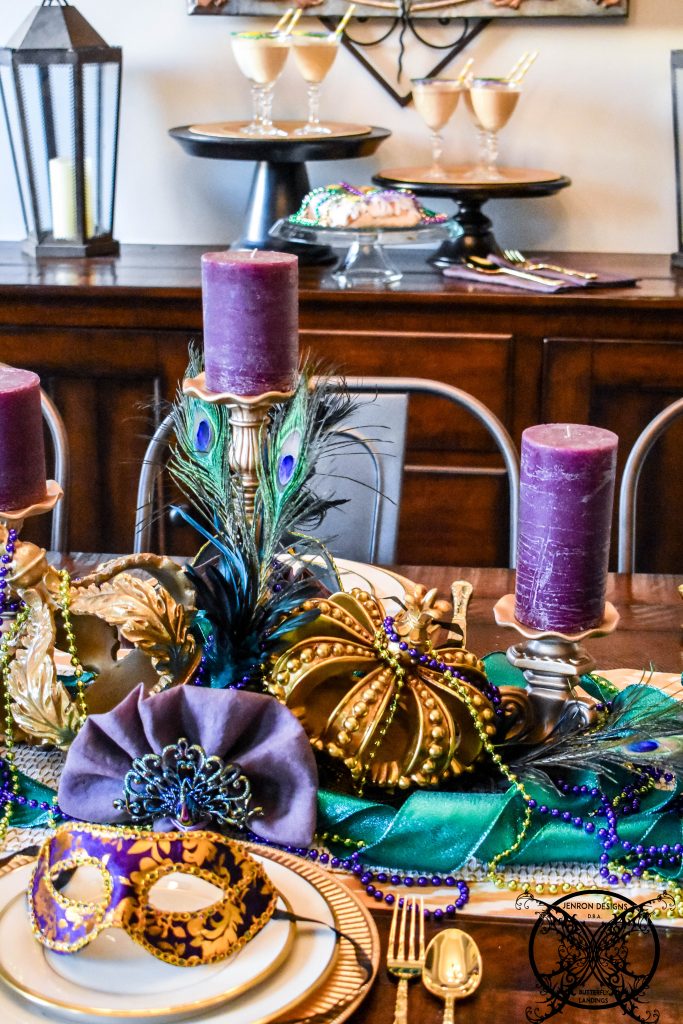 The first New Orleans Mardi Gras parade was held on February 24, 1857 by the Krewe of Comus. In 1875, Governor Warmoth signed the “Mardi Gras Act,” which made Fat Tuesday a legal holiday in Louisiana and it still is to this day. 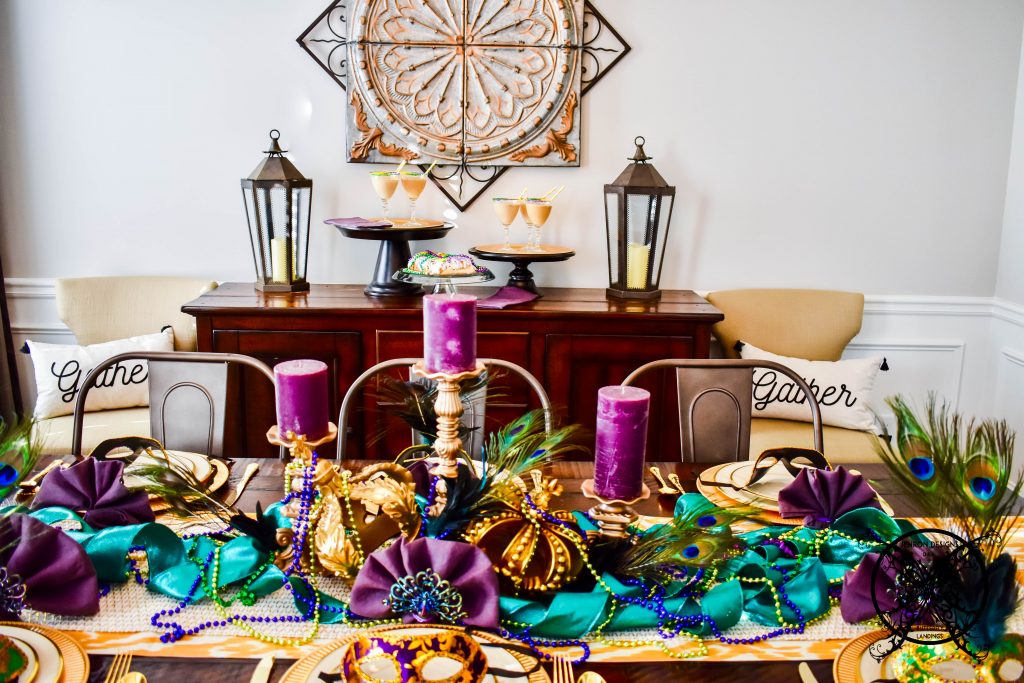 I love the colors associated with Mardi Gras. I think the color combination of purple, gold and green have a very regal feel. The purple stands for justice; gold for power; and green for faith. I also love the ornate masks that are associated with the holiday. Did you know, that by law, parade float riders must always wear a mask on Fat Tuesday? Masking is also legal for everyone else on Fat Tuesday, and the more elaborate masks the better. 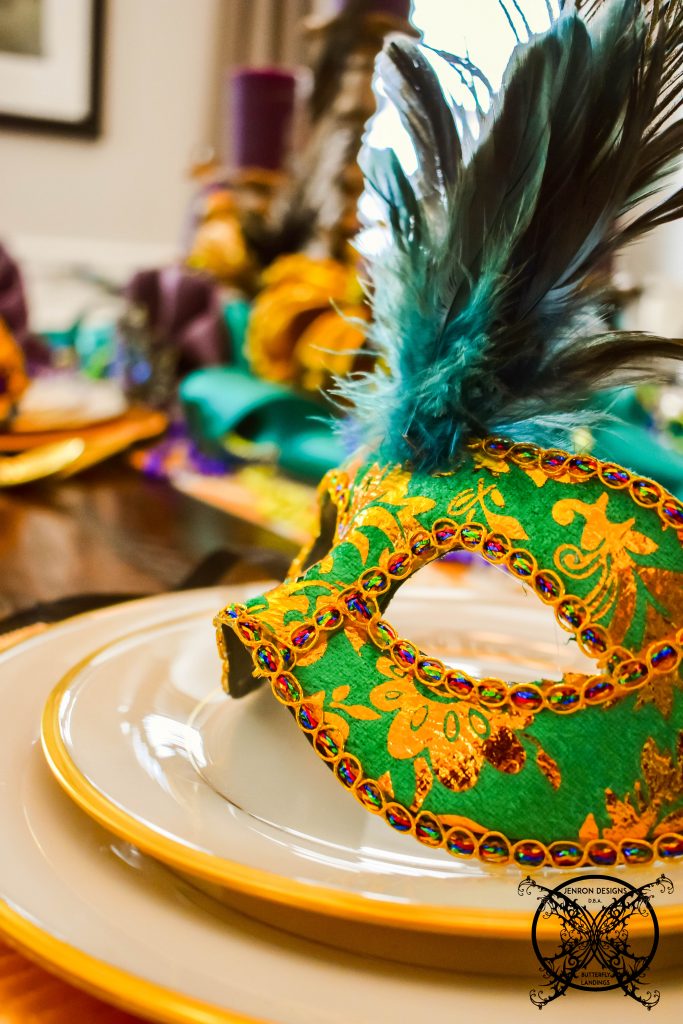 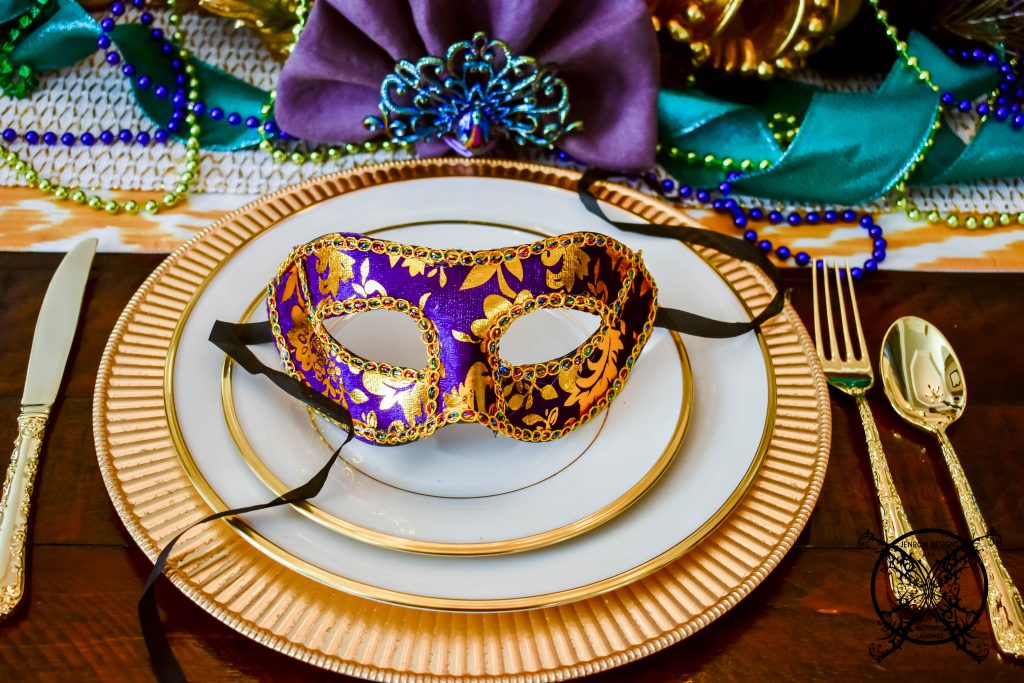 These are some of the prettiest venetian masks I have seen this season. I decided to dress up a few for the ladies, by adding some fun peacock feathers for a more authentic Venetian feel. Also, I found that the color of the peacock feathers really complimented this table as well. 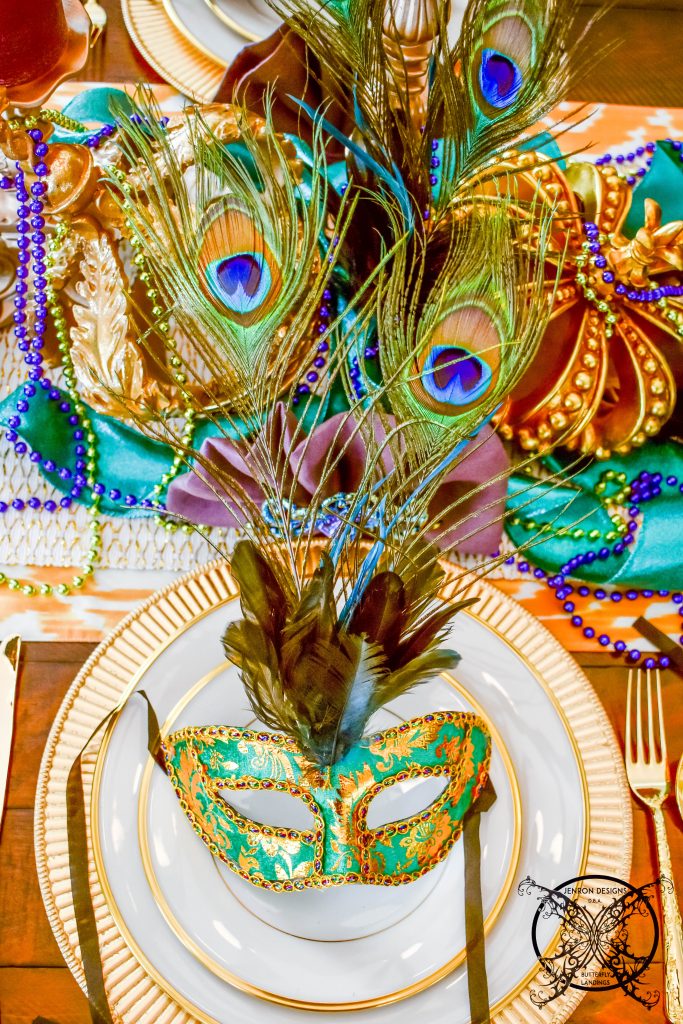 I decided to fan fold these regal purple napkins, which this created a peacock shaped napkin. The napkins are adorned with these unique, standing peacocks to finish off the look. 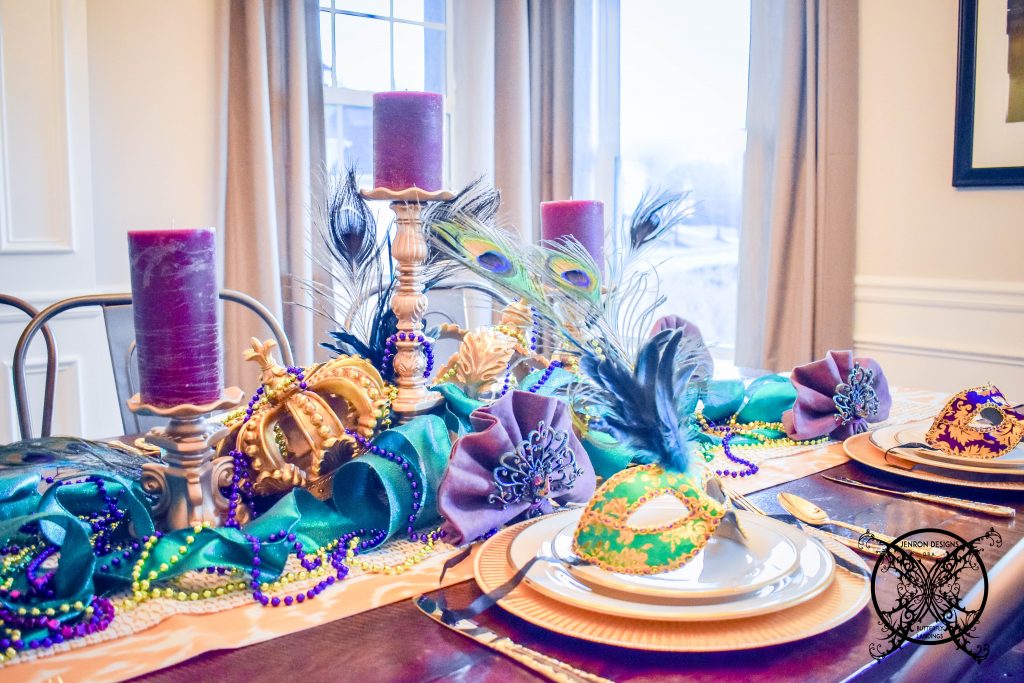 I would also like to add that the peacocks,  can also hold a place card perfectly, if you are hosting a more formal dinner party.  My advice would be to use a monogram of your guest to add an additional touch of class. 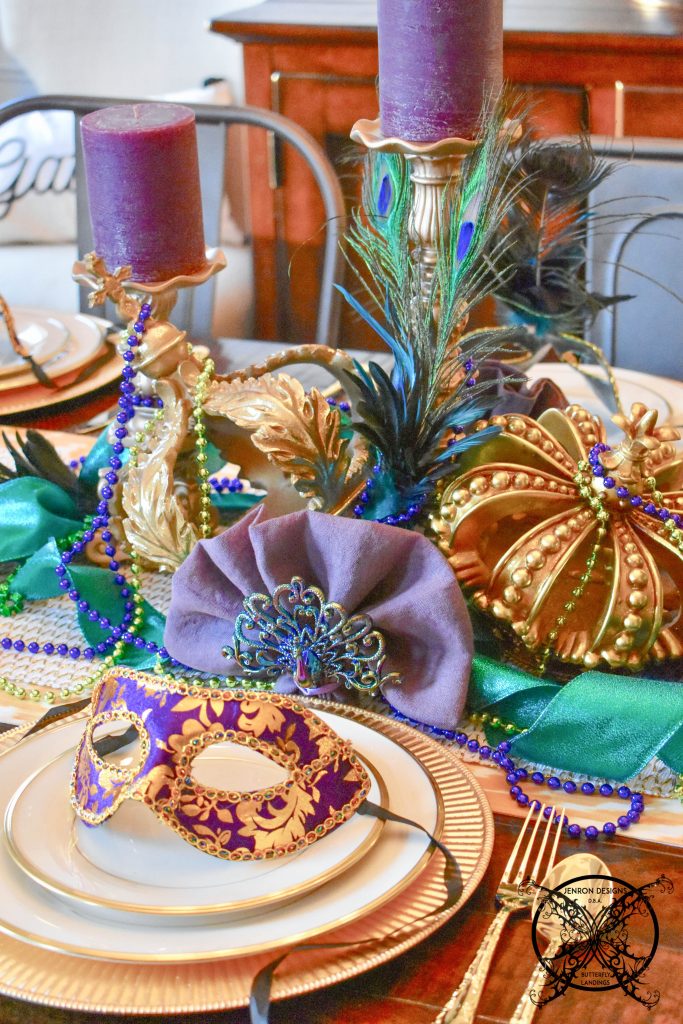 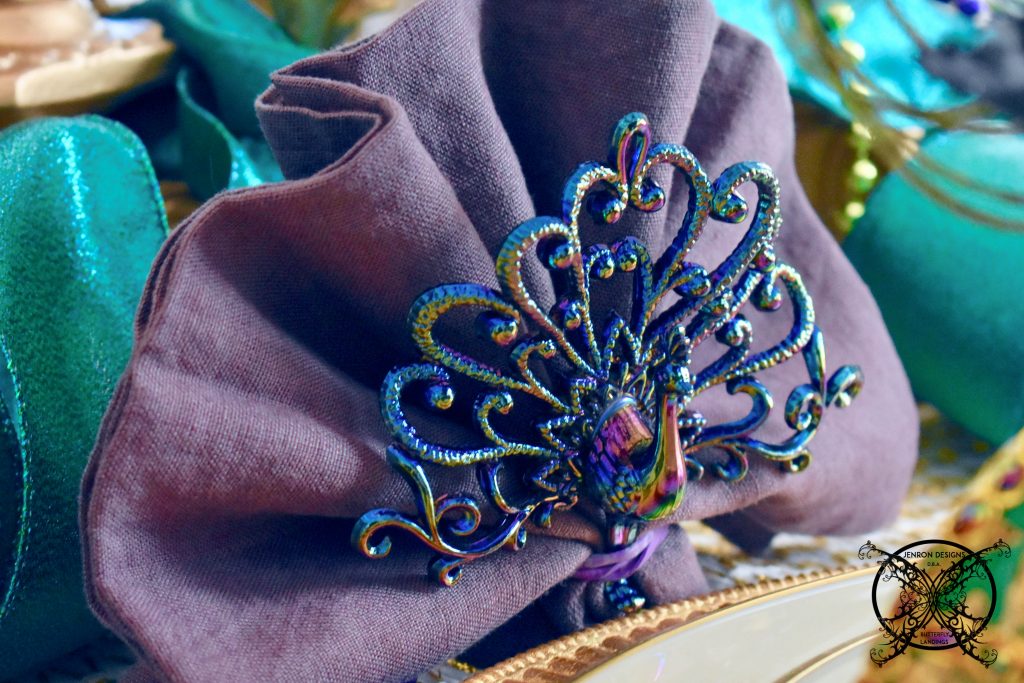 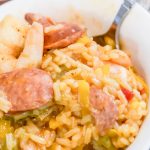 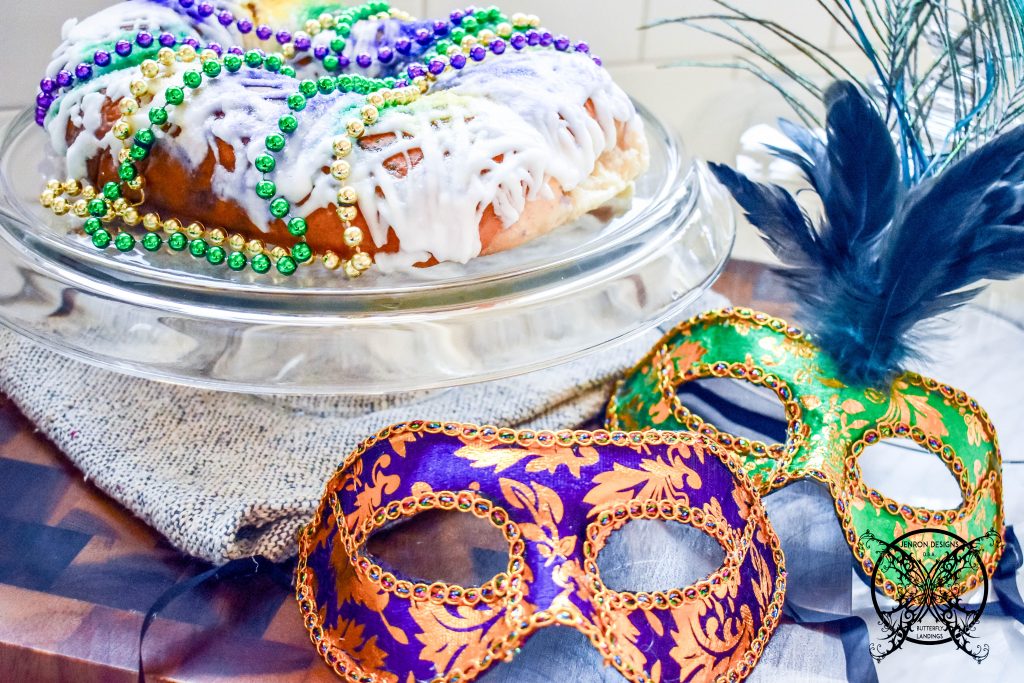 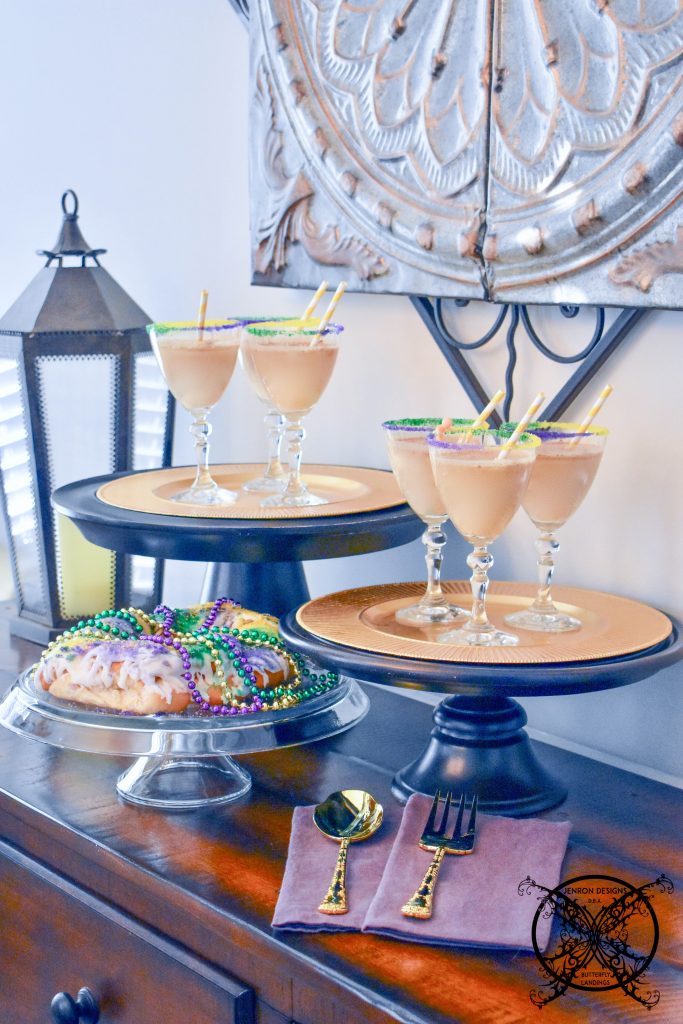 Be sure to check outlaw to make this amazing  King Cake Cocktails. They are so yummy and tasty.  Just like a sweet slice of King Cake with hints of almond and cinnamon. Laissez les bons temps rouler! 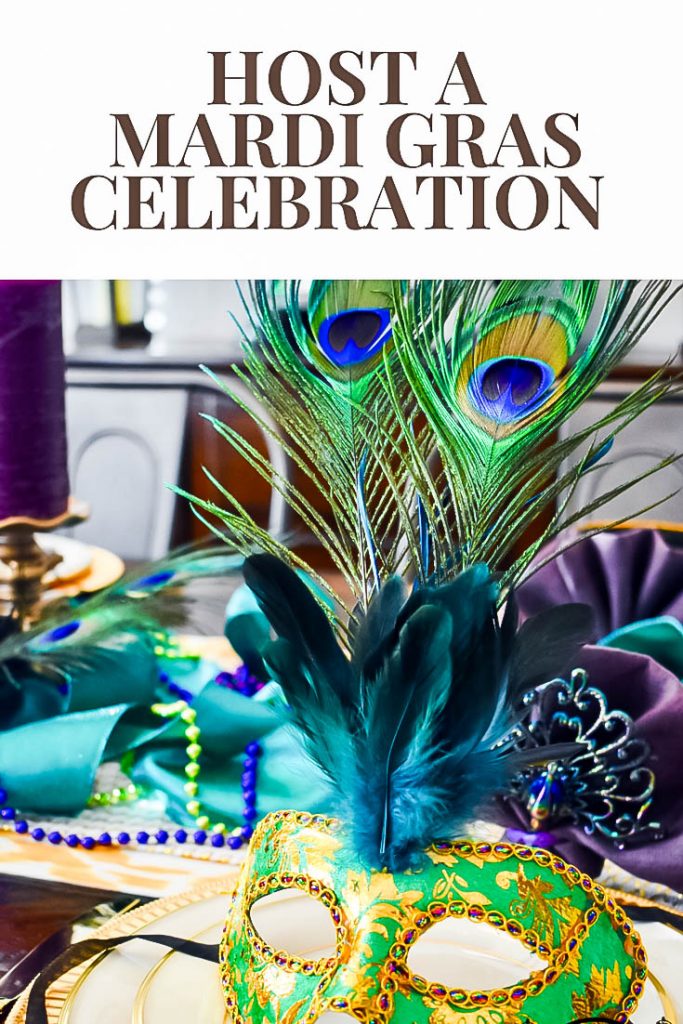 Join our tribe and sign up for our Designer Notes which is a fun update of what we are up to each month.

*Please note that this post may contain affiliate links for your convenience. These involve no extra cost to you, but may result in me receiving a small commission – for which I am very grateful! You can view my full advertising disclosure here.

GET THIS PARTY STARTED:

Tips for browsing the site, you can easily search subjects with the KEYWORD SEARCH cloud below: For Example, Click Recipes to peruse my ever growing recipe box for all of our favorites. Cocktails for some of our best libations to celebrate any occasion. See pretty decor ideas in Valentines and Easter; or select Organization for DIY’s to get you all set to take on 2023!